Racial and gender wealth differences are widening and show no signs of reversing. Many efforts to close a racial wealth gap fall short of understanding the systematic, historical advantage white Americans received from economic policies over time. In some cases, these efforts give us a false notion that if people just make better financial decisions they will become prosperous. Insight believes that we need to direct solutions at the root causes of both racial and gender wealth inequities in order to shift power back to everyday Americans, not just the rich. 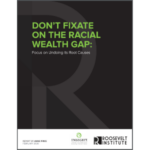 Inequality is a defining American issue, and perhaps no measure more accurately exemplifies the failures and injustices of historic and current-day economic decisions than the “racial wealth gap.” In the current political moment—when bold ideas to rebalance economic and political power, especially by race, are central to public debate—we have the opportunity to reevaluate how we think about racial inequality and how our current economic system has exacerbated it. 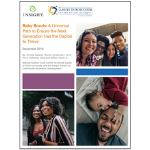 Baby Bonds: A Universal Path to Ensure the Next Generation Has the Capital to Thrive | January 2020

Our current racial wealth inequities are the result of past and present government actions and policies. Therefore, solutions to address racial wealth inequities must involve government action, with Baby Bonds being a promising policy to begin to alleviate such massive racial injustice. The report amplifies the urgency of the intergenerational wealth gap while distinguishing and acknowledging the racial wealth gap, with a grave imperative to address both through a race-conscious, universal policy like Baby Bonds. 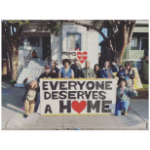 In an act of civil disobedience—and out of the need to secure a safe space to live—members of Moms 4 Housing, a collective of unhoused mothers in Oakland, settled into a vacant home in West Oakland with the goal of raising awareness of the housing and homeless epidemic in California. Armed police from the Alameda County Sheriff’s Office came before dawn to evict and consequently arrest the single Black mothers. The images from the scene challenge us to examine how race and gender inequality are embedded in the DNA of our homelessness epidemic. 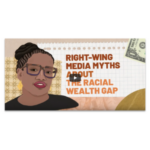 Racial wealth inequality in the U.S. has been steadily increasing since the Great Recession. White Americans disproportionately enjoy economic security from wealth, and right-wing media often blame Black people for their lack of financial means. Media Matters spoke with Insight President Anne Price, who leads the Closing the Racial Wealth Gap Initiative, which elevates the voices of experts of color. She dispels racist right-wing media myths linking the wealth gap to behavioral pathology and deservedness. 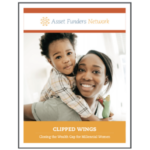 Millennial women represent 31.5% of the female population in the U.S. but do not benefit from many economic policies and systems designed by, and built to meet the needs of, men. They came of age during the Great Recession, a rise in mass incarceration, unprecedented student debt levels, and changing workforce dynamics. These factors contribute to the fact that they are 37% more likely than Generation Xers (those born from 1965-1984) to be living below the federal poverty line and more likely to be underemployed.

The Color of Wealth in Miami 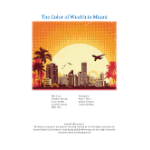 The Color of Wealth in Miami is a joint publication of the Kirwan Institute for the Study of Race and Ethnicity at The Ohio State University, the Samuel DuBois Cook Center on Social Equity at Duke University, and the Insight Center for Community Economic Development. The findings in this report from the National Asset Scorecard for Communities of Color (NASCC) survey reveal major disparities in wealth accumulation and income across various racial and ethnic groups in metropolitan Miami. 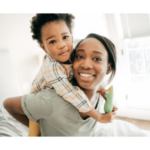 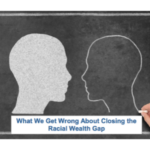 What we Got Wrong about the Wealth Gap | July 2018

The racial wealth gap is large and shows no signs of closing. Recent data from the Survey of Income and Program Participation (2014) shows that black households hold less than seven cents on the dollar compared to white households.1 The white household living near the poverty line typically has about $18,000 in wealth, while black households in similar economic straits typically have a median wealth near zero. This means, in turn, that many black families have a negative net worth. (Hamilton et al. 2015). 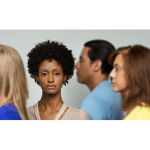 Women, Race and Wealth is the first in a series of briefs that summarize patterns of household wealth among Black and white women by college education, family structure and age using the Panel Study of Income Dynamics (PSID). Researchers from Duke University and the Insight Center for Community Economic Development analyzed data on assets such as savings and checking accounts, stocks, retirement accounts, and vehicles. Debts included credit card debt, student loans, medical debt, mortgages and vehicle debt.

The Color of Wealth in the Nation’s Capital | November 2016

The Color of Wealth in the Nation’s Capital is a joint publication of the Urban Institute, Duke University, The New School, and the Insight Center for Community Economic Development. This report explores racial and ethnic differences in net worth, focusing on Black families in Washington, DC, and shows, through a chronicle of their history in the city, how discrimination and systemic racism have contributed to today’s wealth gap in the nation’s capital. 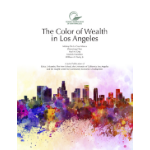 The Color of Wealth in Los Angeles | March 2016

The new report examines wealth inequality across racial and ethnic groups in Los Angeles, shows substantial disparity with Japanese, Asian Indians, Chinese and whites ranking among the top, while blacks, Mexicans, other Latinos, Koreans and Vietnamese rank far behind. “The Color of Wealth in Los Angeles” is the first report to compile detailed data on assets and debts among people of different races, ethnicities and countries of origin residing in the Los Angeles area. 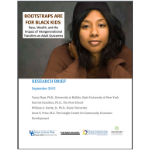 Bootstraps are for Black Kids | September 2015

A study shows that—despite a close to 19 to 1 racial difference in median wealth—Black parents demonstrate an outsized commitment to using their limited resources to invest in their children’s education. And that investment pays off; bringing their children to near parity in terms of educational achievement with their white counterparts. The study shows Black families contribute to higher education with a median net worth of only 24K while white families provide support with a much higher median net worth of more than 168K. 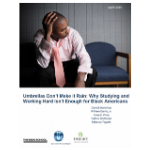 This report challenges America’s egalitarian promise of opportunity and individual agency. Research and public policy have traditionally focused on education and income as drivers of upward mobility. Umbrellas Don’t Make it Rain reveals that it’s the unearned birthright of inheritance or other family transfers that has the greatest effect on wealth accumulation, and likewise is the largest factor erecting barriers to wealth accumulation for people of color.