Shanya Hayes is going places. While many students her age spend their summer vacations doing anything but school work, this bright young scholar has been staking out her future.

And as her ambition leads her toward new understandings, she’s learning more about what her journey might entail as a young Black woman growing up in a society still deeply marked by bias and its profound but not always visible effects. 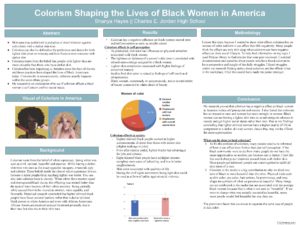 Click the image above to view a full-sized
version of Shanya’s research findings poster.

A junior at Charles E. Jordan High School in Durham, North Carolina, Shanya is a participant in the Scholars to College program at the Emily K Center. As part of its mission to develop student leaders and break the cycle of poverty, this nonprofit organization provides college readiness programming and other services to academically-focused students with financial need.

Through this holistic college-readiness program, Shanya enjoys weekly small-group instruction and one-on-one guidance during the school year, and she is engaged in academic, leadership, and career-related enrichment activities over the summer.

As part of her enrichment activities this past summer, Shanya participated in the Young Scholars Summer Research Institute, an initiative of the Samuel Dubois Cook Center on Social Equity at Duke University, which engages its young participants in “the study of the causes and consequences of inequality.”

Shanya’s interests led her to research a topic that was new to her as a concept but, as she would discover, was something she had already seen and experienced: colorism.

“Colorism is skin-tone bias, which is basically racial inequalities within race, with the idea that being lighter is better, within all races,” Shanya explains.

Shanya grew up seeing this biased attitude at school and in social media but did not know that it was colorism, per se, or that it has such a far-reaching effect on people’s lives – for both women and men, and across all races.

Smarter, more beautiful, even a “better” person – these are the types of baseless connotations that are so commonly associated, either consciously or unconsciously, with lighter skin.

As documented in a growing body of research, the effects of this deeply ingrained bias are profound. Colorism influences not only social-emotional issues of self-esteem and self-perception, but also – and most surprising to Shanya – socio-economic status. As Shanya reports from her research, lighter skinned women complete more years of school, live in better neighborhoods, and earn more money than their darker-skinned counterparts.

The last point really hit home for Shanya after she shared her research with her peers but saw it discredited by a classmate who refused to acknowledge it as a real form of discrimination.

“One girl I know my age, she’s a light-skinned girl, her family is light-skinned, and she was talking to me and a friend, saying that she doesn’t believe that colorism is a real thing,” Shanya recalls. “And it kind of made me upset, because I found all this research on it, I shared it with her, and she still doesn’t see how it’s a real thing because it doesn’t affect her as much as it would a darker-skinned woman. It’s really sad to know that there’s a lot more people like her who believe the same thing.”

Shanya shares her research with the hope of raising awareness about colorism and bringing its largely unseen or unacknowledged consequences to light.

“The more people who know about it and its real effects, what it actually does to Black people as a community, to all races as a whole, I feel like it would change if people learned about it.”

In drawing on both her research and personal experience, she says that one important step for countering this deeply-ingrained bias would be to foster, in the media and our culture at large, a “more diverse range of what is beautiful.”

And by sharing her story, this bright young mind is doing just that.

For added context, we direct readers to two seminal papers in the body of research on colorism and its socioeconomic effects, and another, more recent overview of this deeply-ingrained form of racial discrimination.

“Skin Tone and Stratification in the Black Community” – Chicago Journal

“Indeed, this study found that complexion continued to be a significant predictor of such outcomes as educational attainment, occupation, and income among black Americans. Moreover, our analysis showed that skin tone and other contemporaneous factors were more strongly related to stratification outcomes than were such background characteristics as parental socioeconomic status. Virtually all of our findings parallel those that occurred before the civil rights movement. These facts suggest that the effects of skin tone are not only historical curiosities from a legacy of slavery and racism, but present-day mechanisms that influence who gets what in America.”

“Evidence on Discrimination in Employment: Codes of Color, Codes of Gender” – The Journal of Economic Perspectives

“Johnson, Bienenstock, and Stoloff (1995) looked at dark-skinned and light-skinned black males from the same neighborhoods in Los Angeles, and found that the combination of a black racial identity and a dark skin tone reduces an individual’s odds of working by 52 percent, after controlling for education, age, and criminal record! Further evidence that lighter-complexioned blacks tend to have superior incomes and life chances than darker-skinned blacks in the United States comes from studies by Ransford (1970), Keith and Herring (1991) and Johnson and Farrell (1995)….Evidently, skin shade plays a critical role in structuring social class position and life chances in American society, even between comparable individuals within minority groups.”

“Discussing colorism is not a ‘distraction’ from the important issue of racial discrimination. In fact, understanding colorism helps us better understand how racism works in our contemporary society. Colorism is one manifestation of a larger ‘racial project’ that communicates meaning and status about race in the USA (Omi and Winant 1994). Studies on skin-color stratification support the contention that racial discrimination is alive and well (Keith and Herring 1991; Mason 2004), and so insidious that communities of color themselves are divided into quasi-racial hierarchies (Alba et al. 2000; Hunter 2005; Seltzer and Smith 1991). As long as the structure of white racism remains intact, colorism will continue to operate.”