Bootstraps Are For Black Kids: Race, Wealth, and the Impact of Intergenerational Transfers on Adult Outcomes

A new study released today shows that—despite a close to 19 to 1 racial difference in median wealth—black parents demonstrate an outsized commitment to using their limited resources to invest in their children’s education. And that investment pays off; bringing their children to near parity in terms of educational achievement with their white counterparts.

“Bootstraps Are For Black Kids: Race, Wealth, and the Impact of Intergenerational Transfers on Adult Outcomes,” is co-authored by William Darity, Duke University; Darrick Hamilton, The New School; Yunju Nam, University at Buffalo, State University of New York; and Anne Price, of The Insight Center for Community Economic Development.

“Data on intergenerational transfers of economic resources for higher education is limited,” said Darity, co-author and director of the Samuel DuBois Cook Center on Social Equity at Duke. “However, this type of parental financial support might ultimately prove to be a decisive factor determining the racial wealth gap in the next generation.”

The study is based on the 2013 Panel Study of Income Dynamics (PSID) that found that the racial wealth gap might be one of the main mechanisms for perpetuating economic inequality. Using PSID data collected between 1982 and 2013, “Bootstraps Are For Black Kids” researchers began to investigate the relationships between parental income and wealth, parental financial support, and their child’s economic achievement. The study distinguished three types of parental financial support – support for higher education, support for homeownership, and support for “other purposes.”

“Black parents who are able to contribute to their child’s education are better able to transfer their own socioeconomic status to the next generation,” said Price, managing director and chief asset officer for the Insight Center. “However, it’s important to remember that while parental support for education lowers black/white disparities in education and home ownership, there is little variation in racial gaps in income and wealth.”

Despite the findings that over half of the blacks who received parental help have a graduate education, stark racial differences in both income and net worth persist. Among those who received financial support from parents, the median income is $98,066 for whites and $69,306 for blacks; median net worth is $63,000 and $35,996, respectively. 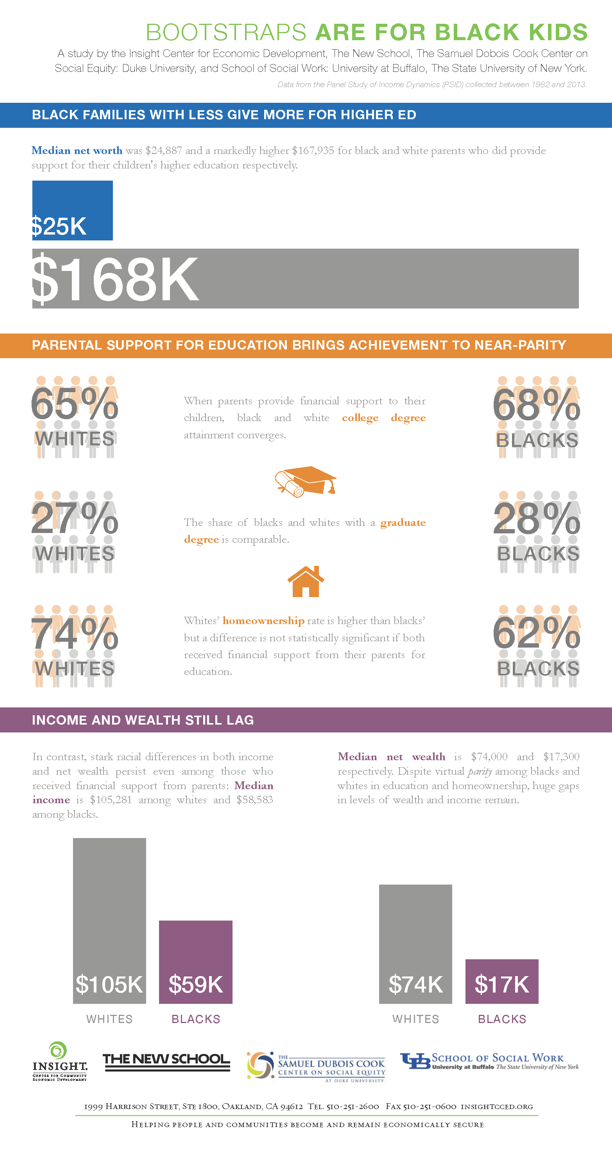 Under Consideration Discussion Series: How can we combat unjust housing practices? | February 3

Under Consideration is a student-led and developed discussion series…