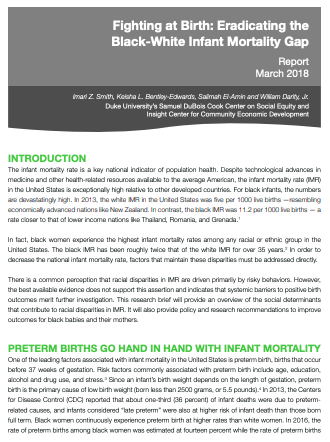 Fighting at Birth: Eradicating the Black-White Infant Mortality Gap, a new co-released report from the Insight Center and the Cook Center on Social Equity, provides a foundation for identifying and understanding root causes of the racial infant mortality gap.

The infant mortality rate (IMR) is a key national indicator of population health. Despite technological advances in medicine and other health-related resources available to the average American, the IMR in the United States is exceptionally high relative to other developed countries. For Black infants, the numbers are devastatingly high. In 2013, the white IMR in the United States was five per 1000 live births — resembling economically advanced nations like New Zealand. In contrast, the Black IMR was 11.2 per 1000 live births — a rate closer to that of lower income nations like Thailand, Romania, and Grenada.

Black women experience the highest infant mortality rates among any racial or ethnic group in the United States, and the Black IMR has been roughly twice that of the white IMR for over 35 years. There is a common perception that racial disparities in IMR are driven primarily by risky behaviors. However, the best available evidence does not support this assertion and indicates that systemic barriers to positive birth outcomes merit further investigation.

This report shows that it is time for policy makers to acknowledge this issue and develop strategies that effectively reduce Black infant mortality. The price for inaction is too high and has both social and economic implications for Black families. Fighting at Birth outlines suggested policies, programs, and strategies, catering specifically to the needs of Black women, in order to decrease the national Black IMR.