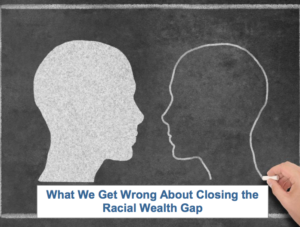 The racial wealth gap is large and shows no signs of closing. Recent data from the Survey of Income and Program Participation (2014) shows that black households hold less than seven cents on the dollar compared to white households.1 The white household living near the poverty line typically has about $18,000 in wealth, while black households in similar economic straits typically have a median wealth near zero. This means, in turn, that many black families have a negative net worth. (Hamilton et al. 2015).

In this report, we address ten commonly held myths about the racial wealth gap in the United States. We contend that a number of ideas frequently touted as “solutions” will not make headway in reducing black-white wealth disparities. These conventional ideas include greater educational attainment, harder work, better financial decisions, and other changes in habits and practices on the part of blacks. While these steps are not necessarily undesirable, they are wholly inadequate to bridge the racial chasm in wealth.

These myths support a point of view that identifies dysfunctional black behaviors as the basic cause of persistent racial inequality, including the black-white wealth disparity, in the United States. We systematically demonstrate here that a narrative that places the onus of the racial wealth gap on black defectiveness is false in all of its permutations.

We challenge the conventional set of claims that are made about the racial wealth gap in the United States. We contend that the cause of the gap must be found in the structural characteristics of the American economy, heavily infused at every point with both an inheritance of racism and the ongoing authority of white supremacy.